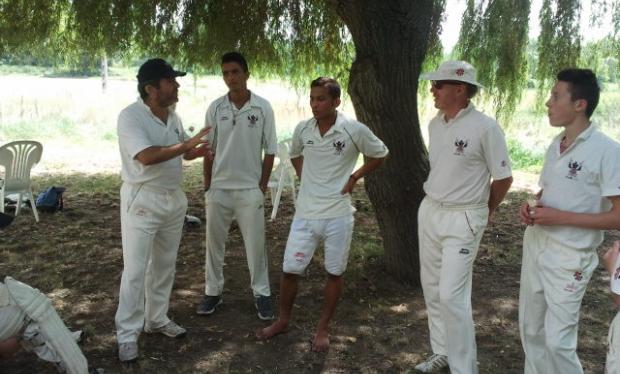 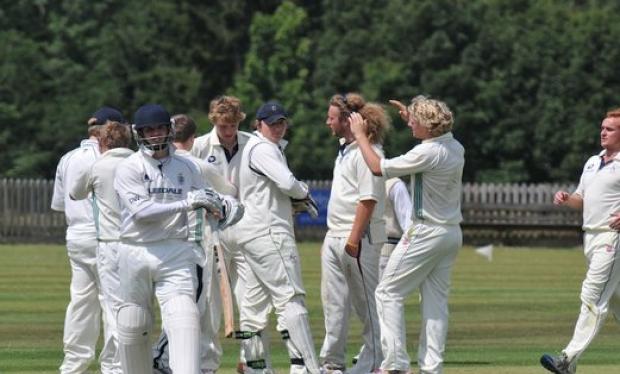 The Belgian 12 Stars Tour to Budapest

No future practice has been scheduled
All Practices

No future match has been scheduled
All Matches

See all this year news

It's a good job that Benjamin won the toss as we had 3 players available at the start time!! It's also a good job that Premnath turned up ON TIME to watch so that he could do the scoring!!!!

So AH and AH (Andrew Harben and András Hudetz) opened the batting and the Baggies must have sensed an easy afternoon. But the singles were run smartly, the ones sometimes made into two's and so on, so that the first wicket fell eventually at 67. András making his highest ever score of 28 and Andrew falling a few balls later for 34 (well I missed him to be honest!!).

From then the two exceptional contributions came from Zeeshan with a typically swashbuckling 39 (what it a swash before or after it has been buckled) and Rajvir with a typically stylish 59. And so to 207 the innings crept with the feeling that it was always going to be 20 - 30 runs short. It might have been easier if we had had an eleventh player but as it typical for Phoenix we only had 10, AGAIN.

Baggies opened solidly with Eddie (40) and David (59) and the century partnership should have signalled a romp to the finish line. The bowling didn't ask any real questions upto the half way point and with 103 on the board the innings was perfectly set for an easy win. Dr Inks Break did his usual damage, most notably with Mahesh (6:0:25:3) coming in to the attack and Zeeshan (8:1:29:2) coming back for a second spell and after Dominic (4), Andrew (13), Ram (7) and Ranjit (3) had come and gone it was possible that an upset might be possible.

But alas I haven't mentioned Sidd yet have I?

While at one end the wickets were falling, Sidd was quietly timing his shots and playing the anchor to the innings to finish on an excellent 41. With only two 4's you get an idea of how cleverly he played. All he needed was someone to to the same at the other end. Which he got when a limping Duncan (ligament strain while bowling) emerged with a runner.

Duncan wasn't going to mess about and besides at almost a run a ball he didn't have a great deal to play with, but he confidently stroked his way to 20 to win the match with his second 4 in the penultimate over.

Well done Baggies, a deserved victory but well done the 10 men of Phoenix for getting it back to such a close finale.

Developed by
Design by